~ One of our Triple Threat Scholars just made a perfect 800 ﻿﻿on the Critical Reading portion!

~ Triple Threat Scholars earned a combined total of  over $1.6 million in merit  scholarships in just over four years!

~  Our students have become four of the last six Star Students (highest SAT score in their senior year) at one Fulton County high school, as well as a valedictorian and a salutatorian. 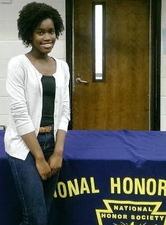 Ayo reached for the sky and she touched it!

SHE DID IT!  She aimed high, she did the work, and she reached the top!  Adding to her many scholastic honors, Ayo became our first perfect scorer.  She scored a perfect 800 on the Critical Reading section AND a perfect score of 12 out of 12 on the essay.  Ayo's other scores were also impressive -- 750 on the Writing section and over 700 on the Math.  We're very proud of this hard-working and focused young lady and what she has accomplished.

These amazing scores of this Lovejoy HS junior were from the SAT that she took last October.  Ayo completed our Triple Threat Test Prep course in the fall of her freshman year and took it again in the fall of her sophomore year.  She did well both times and made significant gains in her practice test scores.  She also learned the most vocabulary words in the class.  "I reviewed the words a lot," she says.  (We know that vocabulary is actually a good predictor of overall SAT performance so her attention to this area was an effective strategy.)  In addition, she did extra practice tests at home so she became very comfortable with the types of questions on the test.  She also gives props to the specific strategies she learned for analyzing SAT reading passages.  She believes that applying those strategies was a significant contribution to her perfect Critical Reading score.

We wish Ayo continued success in all of her endeavors! 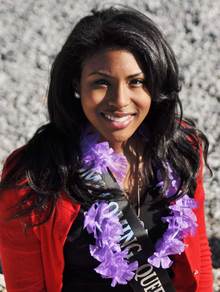 We're especially proud of Paige, a North Atlanta HS senior who
not only was crowned Miss North Atlanta, she also made a
320-point gain on her SAT total score in October after taking our SAT Prep course!  In between her studies as an International Baccalaureate student and her service at NAHS, she had little time to prep for the SAT last spring.  However, she knew that in order to raise her scores, she needed the structure of a class to help her learn effective strategies and to consistently prepare for the test.  A friend suggested that she take Nsoromma's course.  Paige shared how she raised her scores so significantly:

"For math, I took heed of the instructor's suggestion to focus on the questions I  know that I do the best on.  I found more of those types of problems, and practiced with them."  That may sound counter-intuitive, but it works!  She also stated that she carried her SAT vocabulary cards with her and regularly took a few minutes here and there to review them.

"When I saw my October scores, I was ecstatic! My mom was even more excited!" We were happy, too, Paige!  We knew you had the ability to do very well on the test and were pleased to see how well you applied what you learned in the Triple Threat SAT Prep Course.

Best wishes to you!  We know you'll continue to be COMPETENT, CONFIDENT, and STRATEGIC in all your endeavors!

Jehuti, a 2010 Westlake HS grad, became Nsoromma's first National Achievement Scholar and earned the highest SAT score in his graduating class!  He recently graduated with a degree in mechanical engineering from North Carolina A&T State University and is working as an engineer.

The  National Achievement Scholarship is given to academically outstanding African American students who are initially identified as Semi-finalists based on their PSAT scores in their junior year.  During their senior year, they must must demonstrate a record of academic achievement, receive a recommendation from their school, and earn SAT scores that confirm their high PSAT scores.

Along with this honor comes scholarships, scholarships, and more scholarships from many sources!  The National Merit Scholarship Corporation as well as colleges and other corporations give awards ranging from $2500 to full academic scholarships. 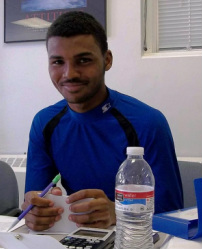 In the fall of 2011  Justin, a Westlake HS senior, was named a Semi-Finalist in the
National Achievement Scholarship competition. Justin made great gains in his
test scores each time he attended our Triple Threat SAT Test prep program -- in 10th grade and again in 11th grade.

After graduating from Westlake, Justin enrolled at Morehouse College!

Best wishes to you, Justin, for continued success!

How do our fees compare with other SAT Prep Courses?